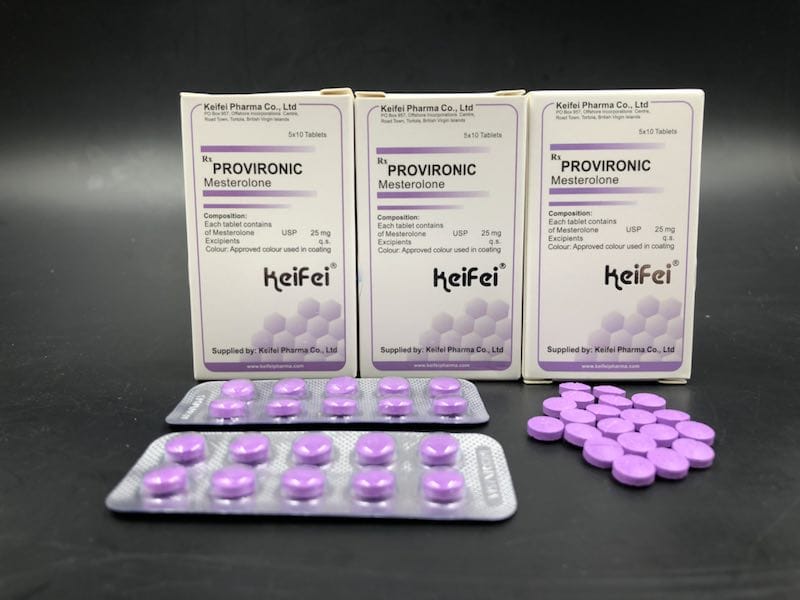 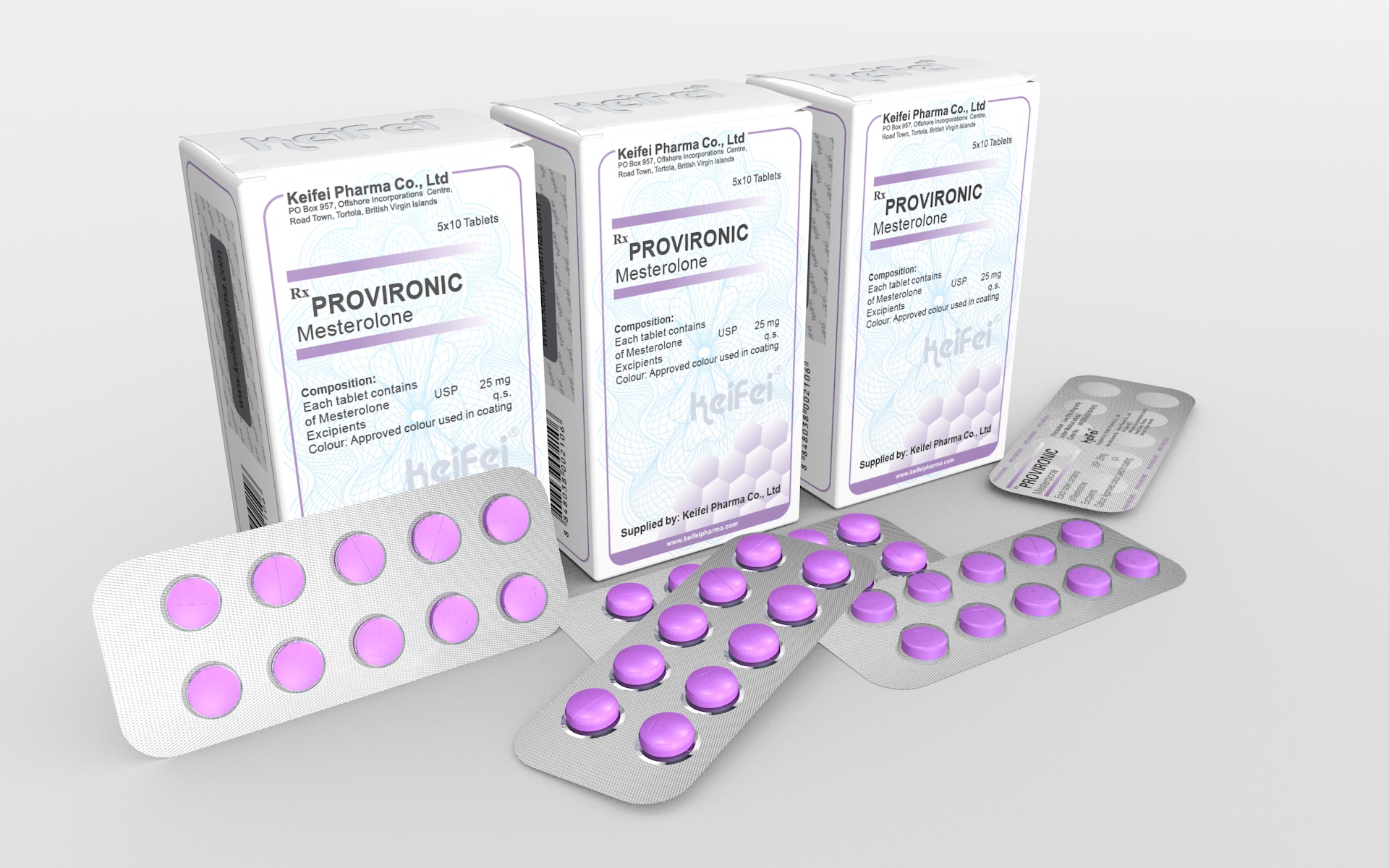 ☀ This product should only be used after the doctor/trainer advice.

Presentation: 25mg per tablet. Purple colour film coated round concave tablet with KF wording imprint on one side. In plastics blister pack of 5 strips x 10 tablets of 50 tablets in a box. Comes with 1 set of 10 digits authentication codes paste on the box.

Provironic is an ly active, 1-methylated DHT. Like Masteron, but then actually delivered in an fashion. DHT is the conversion product of testosterone at the 5-alpha-reductase enzyme, the result being a hormone that is 3 to 4 times as androgenic and is structurally incapable of forming estrogen. One would imagine then that mesterolone would be a perfect drug to enhance strength and add small but completely lean gains to the frame. Unfortunately there is a control mechanism for DHT in the human body. When levels get too high, the 3alpha hydroxysteroid dehydrogenase enzyme converts it to a mostly inactive compound known as 3-alpha (5-alpha-androstan-3alpha, 17beta-diol), a prohormone if you will. It can equally convert back to DHT by way of the same enzyme when low levels of DHT are detected. But it means that unless one uses ridiculously high amounts, most of what is administered is quite useless at the height of the androgen receptor in muscle tissue and thus mesterolone is not particularly suited, if at all, to promote muscle hypertrophy.

Provironic has four distinct uses in the world of bodybuilding. The first being the result of its structure. It is 5-alpha reduced and not capable of forming estrogen, yet it nonetheless has a much higher affinity for the aromatase enzyme (which converts testosterone to estrogen) than testosterone does. That means in administering it with testosterone or another aromatizable compound, it prevents estrogen build-up because it binds to the aromatase enzyme very strongly, thereby preventing these steroids from interacting with it and forming estrogen. So Mesterolone use has the extreme benefit of reducing estrogenic side-effects and water retention noted with other steroids, and as such still help to provide mostly lean gains. Its also been suggested that it may actually downgrade the actual estrogen receptor making it doubly effective at reducing circulating estrogen levels.

The second use is in enhancing the potency of testosterone. Testosterone in the body at normal physiological levels is mostly inactive. As much as 97 or 98 percent of testosterone in that amount is bound to sex hormone binding globulin (SHBG) and albumin, two proteins. In such a form testosterone is mostly inactive. But as with the aromatase enzyme, DHT has a higher affinity for these proteins than testosterone does, so when administered simultaneously the mesterolone will attach to the SHBG and albumin, leaving larger amounts of free testosterone to mediate anabolic activities such as protein synthesis. Another way in which it helps to increase gains. Its also another part of the equation that makes it ineffective on its own, as binding to these proteins too, would render it a non-issue at the androgen receptor.

Thirdly, mesterolone is added in pre-contest phases to increase a distinct hardness and muscle density. Probably due to its reduction in circulating estrogen, perhaps due to the downregulating of the estrogen receptor in muscle tissue, it decreases the total water build-up of the body giving its user a much leaner look, and a visual effect of possessing "harder" muscles with more cuts and striations. Proviron is often used as a last-minute secret by a lot of bodybuilders and both actors and models have used it time and again to deliver top shape day in day out, when needed. Like the other methylated DHT compound, drostanolone, mesterolone is particularly potent in achieving this feat.

Lastly Provironic is used during a cycle of certain hormones such as nandrolone, with a distinct lack of androgenic nature, or perhaps 5-alpha reduced hormones that don't have the same affinities as DHT does. Such compounds, thinking of trenbolone, nandrolone and such in particular, have been known to decrease libido. Limiting the athlete to perform sexually being the logical result. DHT plays a key role in this process and is therefore administered in conjunction with such steroids to ease or relieve this annoying side-effect. Proviron is also commonly prescribed by doctors to people with low levels of testosterone, or patients with chronic impotence. Its not perceived as a powerful anabolic, but it gets the job done equally well if not better than other anabolic steroids making it a favorite in medical practices due to its lower chance of abuse.

Mesterolone is generally well liked nonetheless as it delivers very few side-effects in men. In high doses it can cause some virilization symptoms in women. But because of the high level of deactivation and pre-destination in the system (albumin, SHBG, 3bHSD, aromatase) quite a lot of it, if not all simply never reaches the androgen receptor where it would cause anabolic effects, but also side-effects. So its relatively safe. Doses between 25 and 250 mg per day are used with no adverse effects. 50 mg per day is usually sufficient to be effective in each of the four cases we mentioned up above, so going higher really isn't necessary. Unlike what some suggest or believe, its not advised that Proviron be used when not used in conjunction with another steroid, as it too is quite suppressive of natural testosterone, leading to all sorts of future complications upon discontinuation. Ranging from loss of libido or erectile dysfunction all the way up to infertility. One would not be aware of such dangers because Proviron fulfills most of the functions of normal levels of testosterone.

Send us inquiry about Provironic